THE FLATS – National tennis player of the year Irina Falconi, softball All-American Jen Yee and three-time triple jump All-American Alphonso Jordan are among eight former Georgia Tech greats who are set to be inducted into the Georgia Tech Sports Hall of Fame.

“Congratulations to our eight newest Georgia Tech Sports Hall of Famers,” said director of athletics Todd Stansbury. “We are honored to induct another outstanding class comprised of former student-athletes and staff that have been incredible representatives of Georgia Tech on and off the field, court and track. I’m looking forward to us gathering together this fall to celebrate not only this year’s class, but also the 2020 class of inductees to the Georgia Tech Sports Hall of Fame.”

Following are brief bios on the 2021 Hall of Fame class: 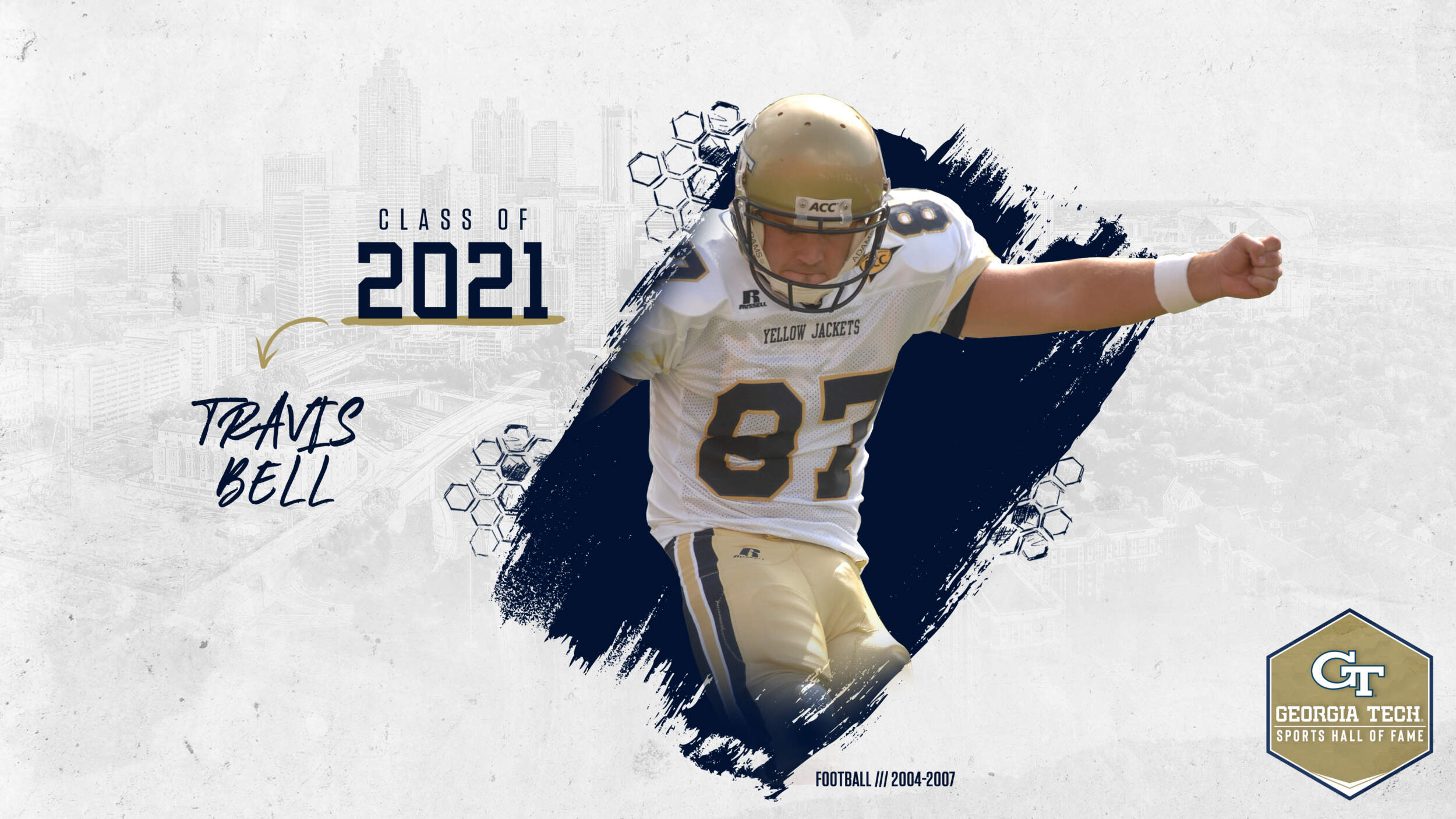 Twice a semifinalist for the Lou Groza Award, which goes to the nation’s top kicker, Travis Bell remains one of the top kickers on Georgia Tech history, holding program records for field goals in a career (61) and season (23 in 2007), while also setting team standards for kick scoring (106 points in 2007) and field goal percentage (.882 in 2004). He is one of two kickers in Tech history to never miss a point-after-touchdown (138-for-138), and remains No. 3 in career scoring (321 points), second in career field goal percentage (.726) and third in career PATs. He earned All-ACC honors twice in his career, making the first team as a senior in 2007 and second-team as a freshman in 2004, and made the ACC’s All-Academic football team three times. He helped Tech to four bowl game appearances and the ACC’s Coastal Division title in 2006. 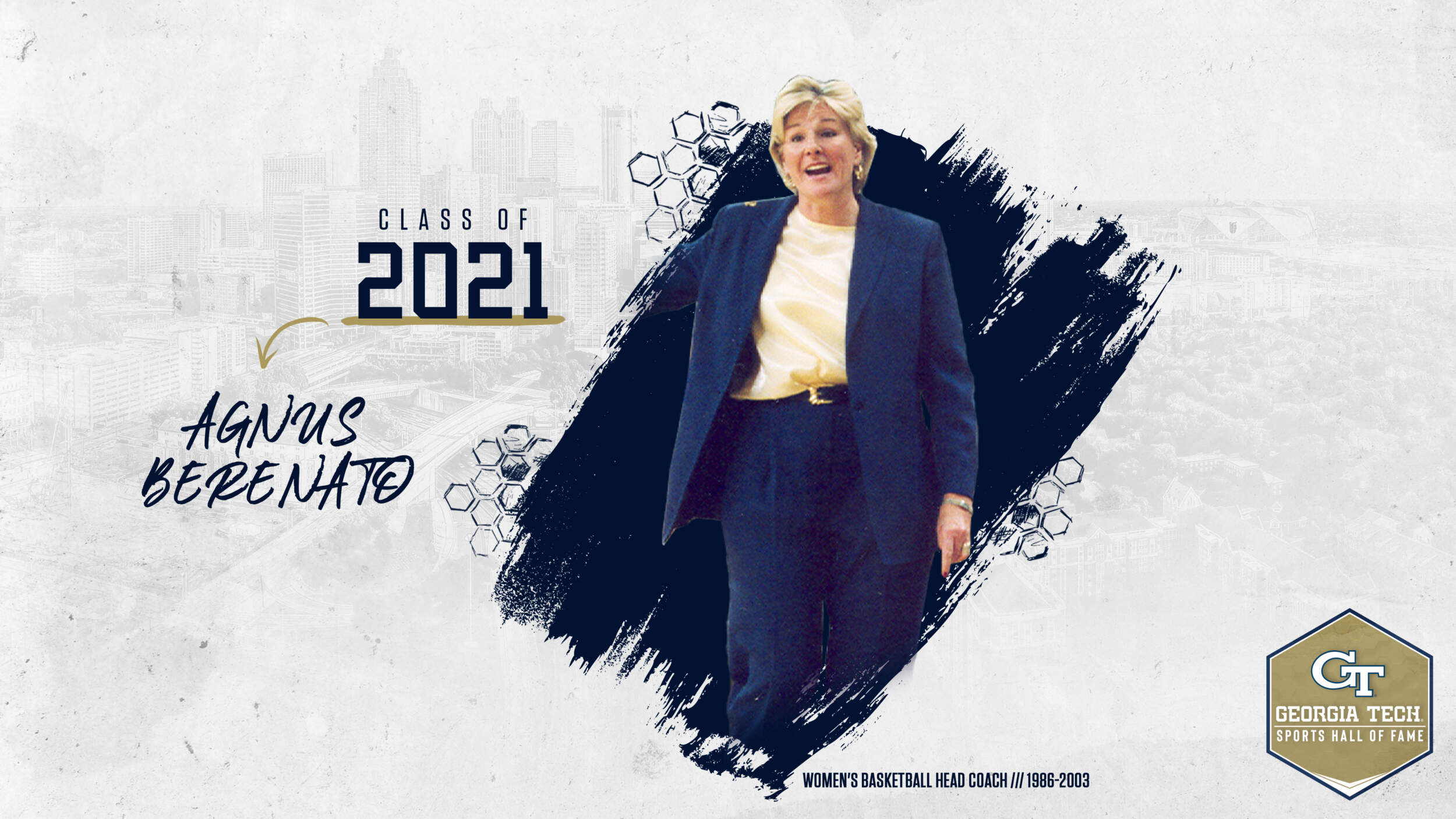 Guiding Georgia Tech to six postseason appearances, Agnus Berenato won 223 games over a 15-year tenure on The Flats, leading Georgia Tech to the championship of the 1992 Women’s National Invitation Tournament and berths in the NCAA Tournament in 1993 and 2003, as well as three other appearances in the Women’s NIT. During her time at Tech, Berenato coached three All-Americans in Joyce Pierce, Kisha Ford and Sonja Mallory, and was named Georgia Coach of the year by the Atlanta Tipoff Club in 1992, as well as by the Georgia Sports Hall of Fame in 1992 and 2000. Now a member of the athletic hall of fame at three schools, Berenato was previously inducted into the halls at Rider University, where she first became a head coach, and Mount St. Mary’s, her alma mater. Her service went beyond the basketball court at Tech, helping generate two endowed scholarships at Tech in the name of deceased player Mandy Miller, and was active in soliciting donors for the renovation of Alexander Memorial Coliseum in 1996. All of her student-athletes who completed eligibility at Tech graduated from the Institute. Berenato went on to coach 11 seasons at Pittsburgh and the last six at Kennesaw State before announcing her retirement in March. 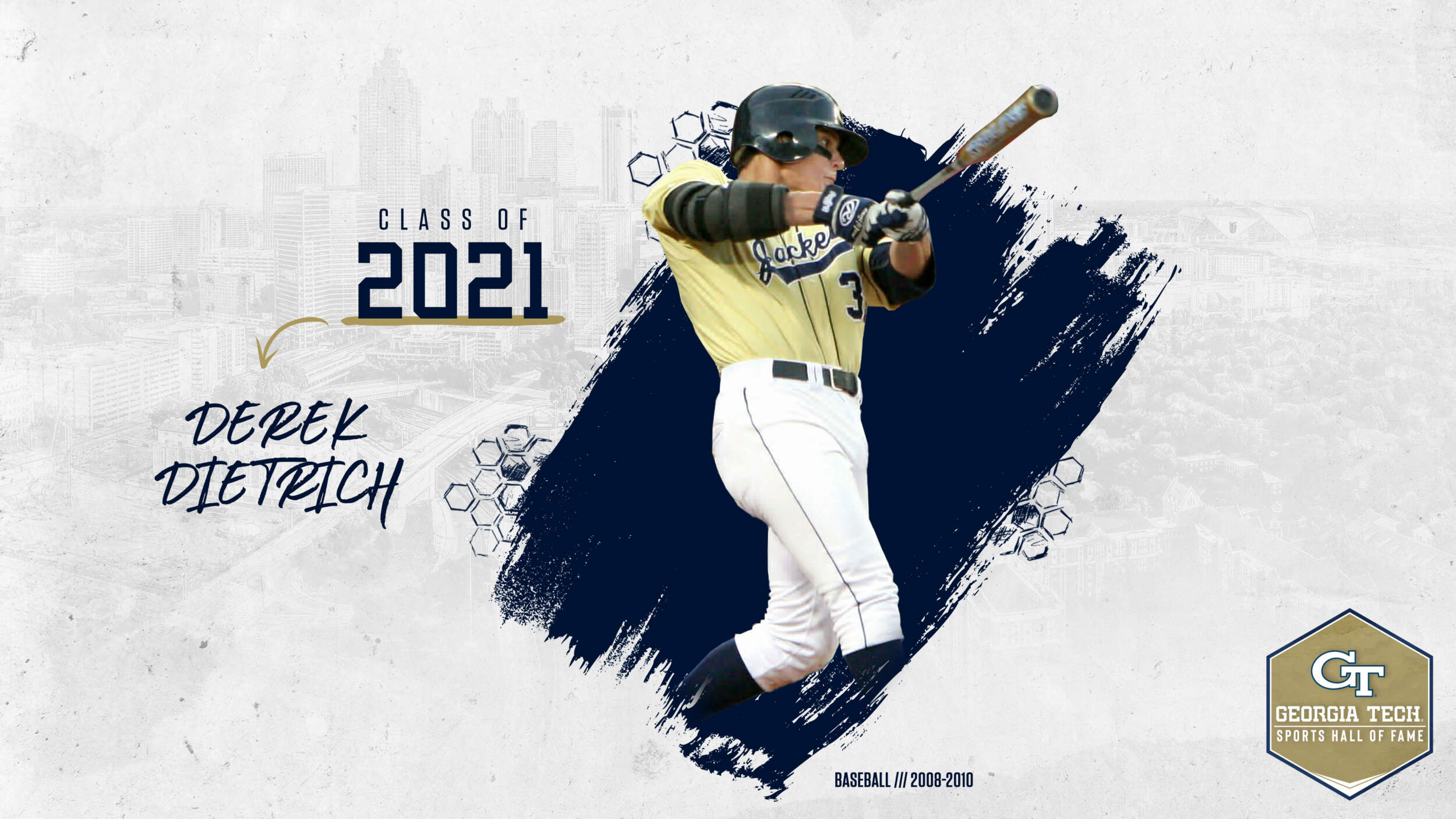 One of the best shortstops in Georgia Tech’s baseball history, Derek Dietrich earned first-team All-Atlantic Coast Conference honors as a junior in 2010 after back-to-back years on the second team (2008, 2009). He was named a third-team All-America in 2010. During his career, Dietrich hit .331 with 38 doubles, nine triples, 41 home runs and 181 RBI over 182 games. He was a semifinalist in 2010 for the Golden Spikes Award, given annually to the top amateur baseball player in the United States, and was a semifinalist in 2009 for the Brooks Wallace Award, which goes to college baseball’s top shortstop. Off the field, he was named the ACC’s Scholar-Athlete of the year in 2010 and earned ESPN CoSIDA Academic All-America recognition in 2009 and 2010. One of just 16 players in Tech history to be drafted in the top two rounds of the MLB Draft when he was a supplemental second pick by the Tampa Bay Rays in 2010, Dietrich has played on the major league level for Miami, Cincinnati, Texas and the New York Yankees. 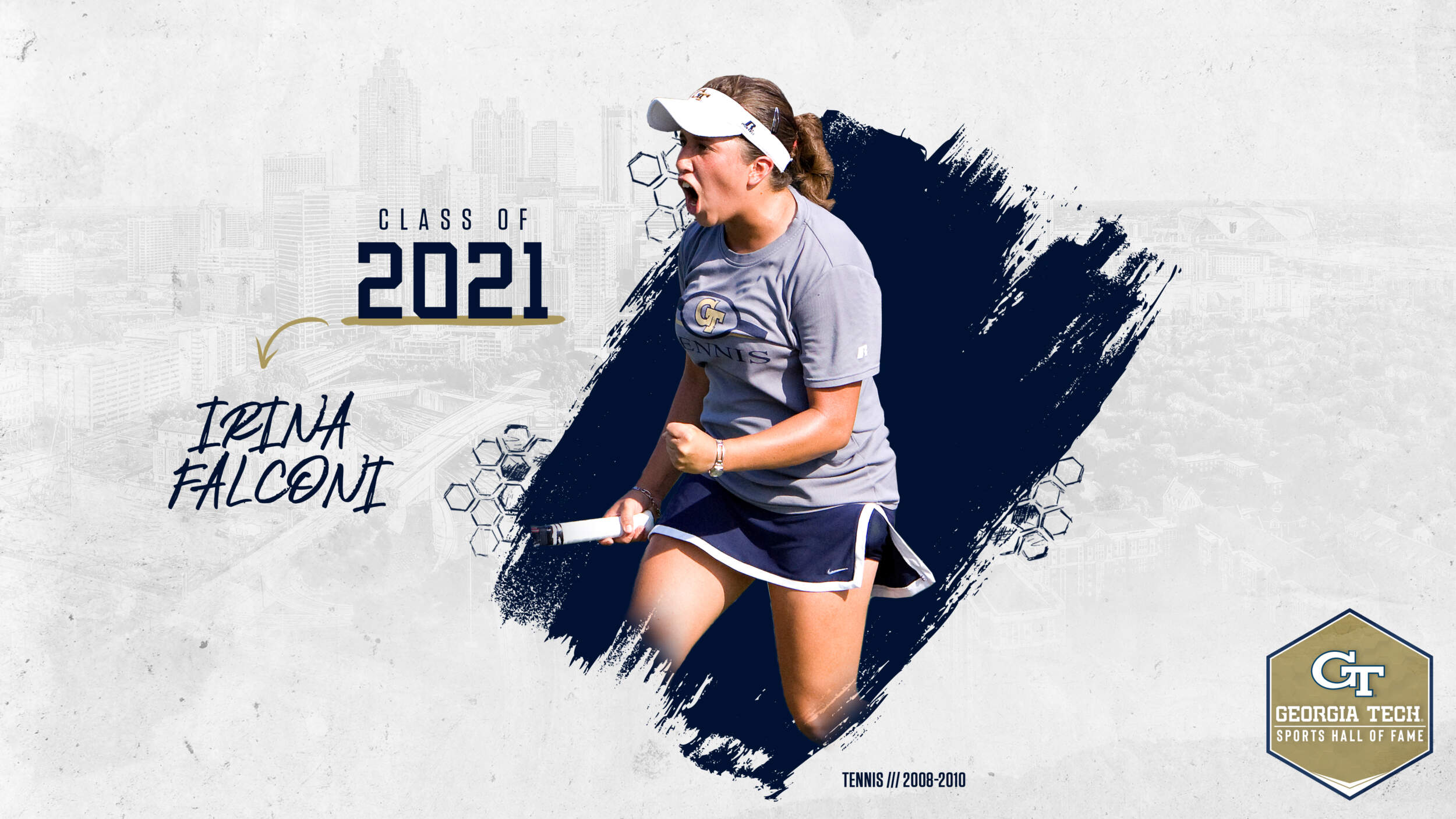 College tennis’ national player of the year in 2010 and a two-time All-American by the Intercollegiate Tennis Association, Irina Falconi left Georgia Tech with the school record in career singles winning percentage with a 70-15 mark from 2008-10, as well as single-season marks for singles wins and winning percentage. Falconi participated in 2009 and 2010 NCAA Singles and Doubles Championships, and she became the fifth Yellow Jacket to earn All-America honors in 2009 and just the second freshman to be nationally recognized. She closed out her two-year collegiate career ranked No. 1 in the nation after compiling a 40-3 singles record as a sophomore, and helped lead Georgia Tech to the 2010 ACC Tournament title, where she was named the tournament MVP. A native of Ecuador who emigrated to the United States as a toddler, Falconi captured the 2009 ITA All-American singles title, and teamed with former Yellow Jacket All-American Amanda McDowell to capture the 2008 ITA All-American doubles title. She turned professional in 2010, competing in several Grand Slam tournaments including the U.S. Open, Australian Open, French Open and Wimbledon, achieving a career high world ranking of No. 63. 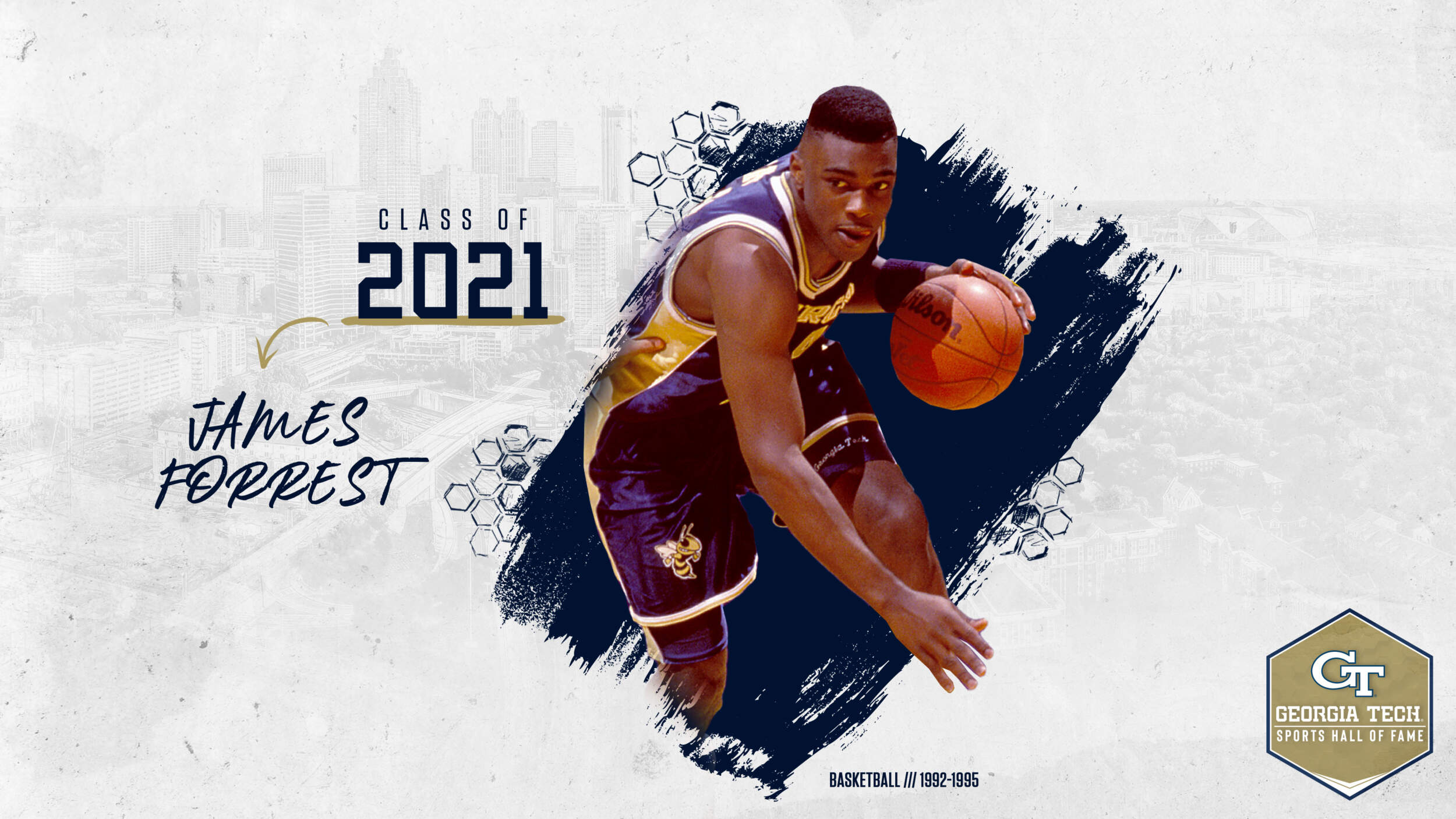 The Most Outstanding Player in the ACC Tournament the last time Georgia Tech captured the championship before this year, James Forrest averaged 26.7 points and 7.0 rebounds and hit 69 percent of his shots from the floor to claim the Everett Case Award in 1993. He led Tech to victories over Duke, Clemson and North Carolina to win the program’s third ACC title, and became the first player in 17 years to score 20 or more points in three consecutive tournament games. A product of South Atlanta High School, he made the All-ACC first team in 1994 and earned third-team honors in 1995. By the time his career ended, he had scored 1,978 points and grabbed 846 rebounds, both of which still rank seventh on Tech’s all-time list, and averaged 17.4 points and 7.4 rebounds per game over his four-year career. Forrest may be best remembered for his miraculous 25-foot three-pointer at the buzzer to give Georgia Tech a stunning 79-78 victory over Southern Cal in the second round of the 1992 NCAA Midwest Regional at the Bradley Center in Milwaukee, Wis. Just a few months later, he stunned Louisville with a half-court heave that beat the final horn in an 87-85 victory over Louisville in the first college basketball game ever played at the Georgia Dome. 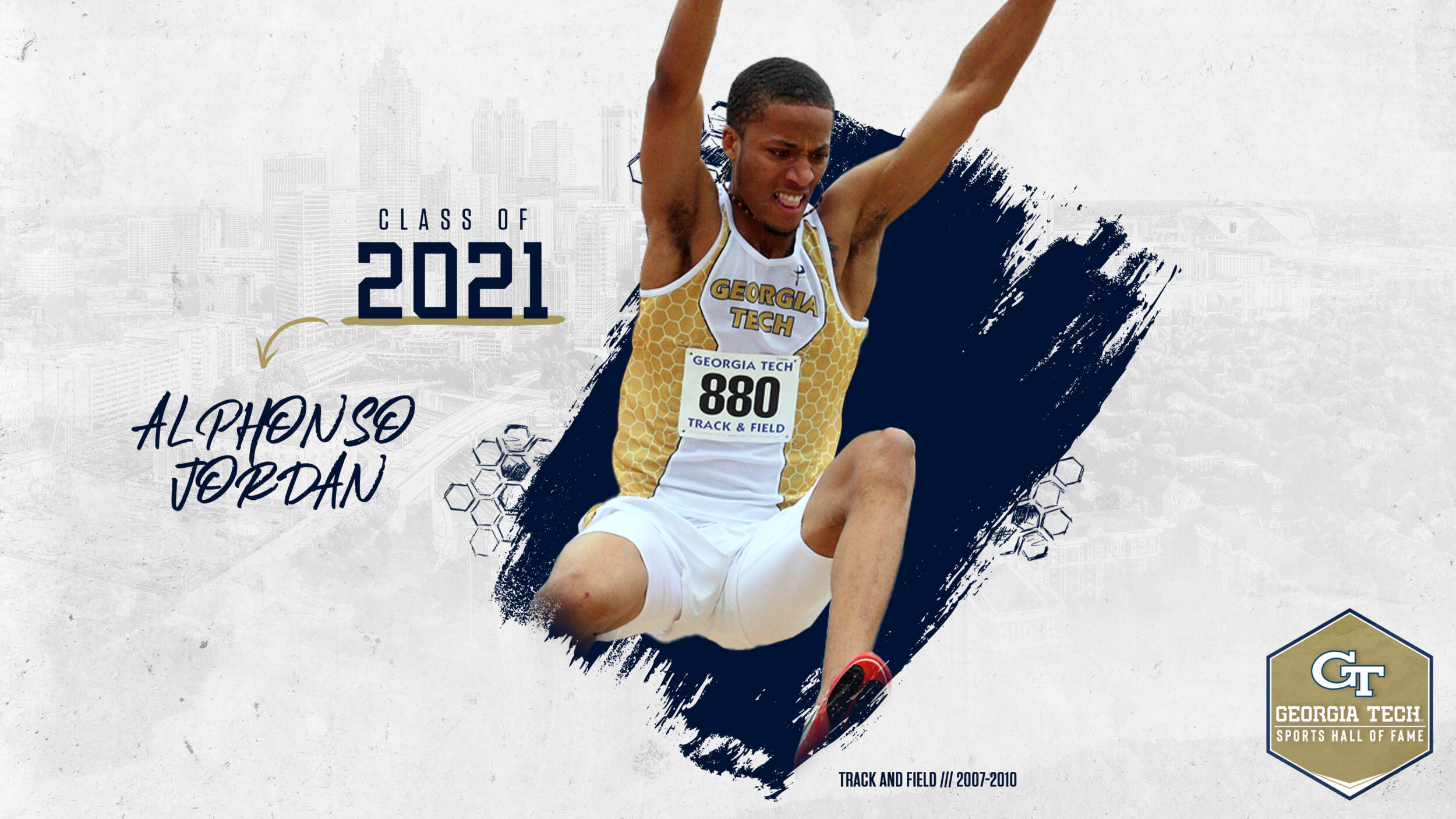 Becoming the fifth Georgia Tech athlete to earn All-America honors in the triple jump, Alphonso Jordan did it three times, being recognized at the 2009 and 2010 NCAA Indoor Championships, and at the 2010 NCAA Outdoor Championships. In his final competition as a Yellow Jacket, Jordan finished eighth overall at Eugene, Ore., after just missing out the prior two years. He graduated from Tech with the Institute’s all-time record performances, both indoors and outdoors. Earlier in the spring of his senior year, he won ACC Championship most outstanding field performer in both the indoor and outdoor championship meets, and won three ACC titles in the triple jump during his career (2008 indoor, 2009 outdoor and 2010 indoor). 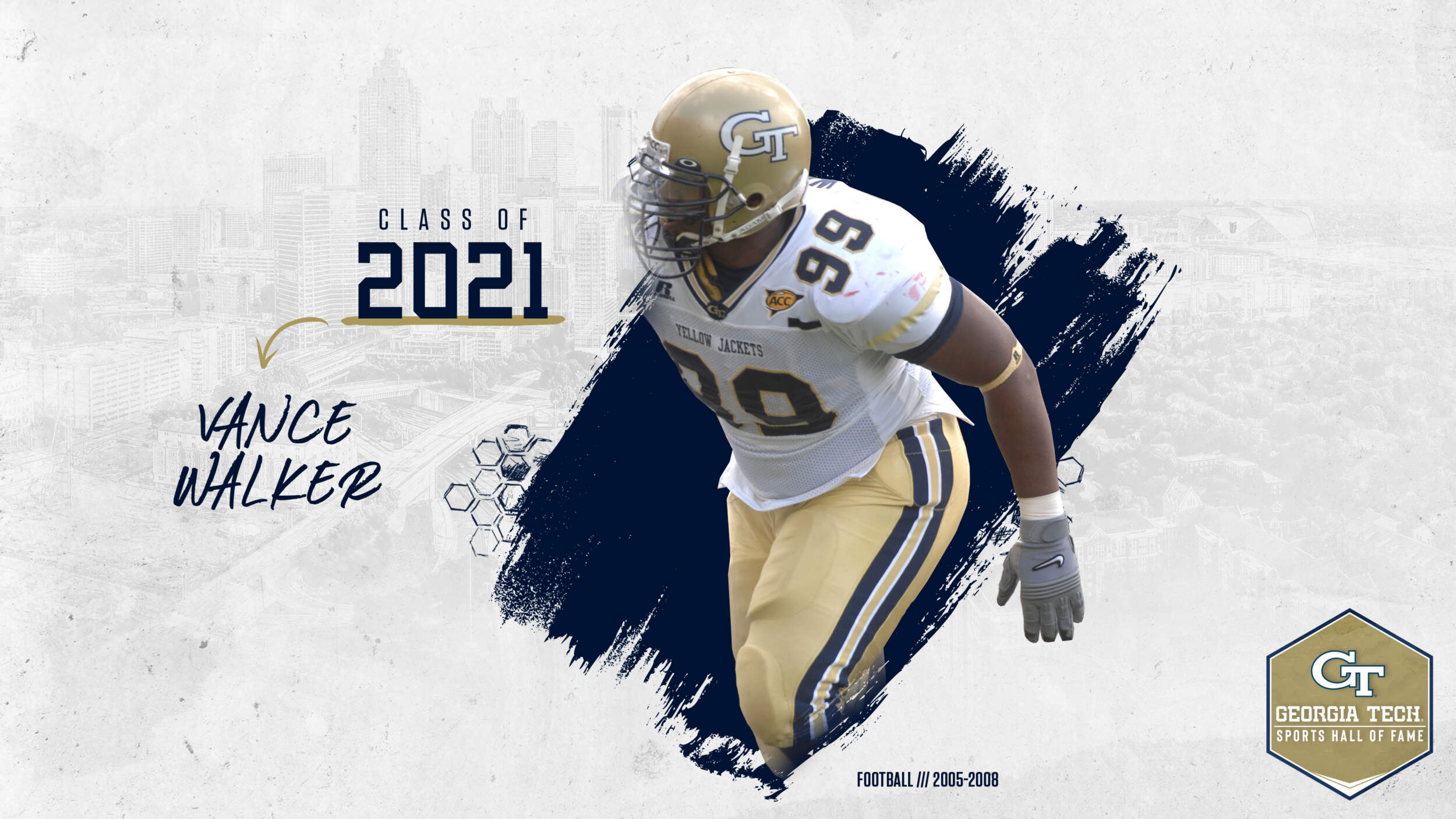 A dominant force at the defensive tackle position who led Georgia Tech to a bowl game each season he played, Vance Walker earned first-team All-Atlantic Coast Conference honors in 2007 and 2008 and was named a third-team All-American by the Associated Press in 2007. During his four seasons, he recorded 13 sacks and 26.5 tackles for loss, and might have had more if not for an ankle injury that slowed his senior season. He played in 49 games and made 29 starts, including every game over his final two seasons. He sacked the quarterback 8.5 times and made 14 tackles for loss, both ranking among the ACC’s top 10, while forcing three fumbles and recovering two en route to his All-America recognition as a junior in 2007. He was a key member of Tech’s 2008 squad that went 9-4, tied for first place in the ACC Coastal Division, beat Georgia for the first time in eight years and earned a berth in the Chick-fil-A Bowl. He enjoyed a seven-year NFL career, finishing with 171 tackles and 12 sacks in 104 games, and helped the Denver Broncos win Super Bowl 50. 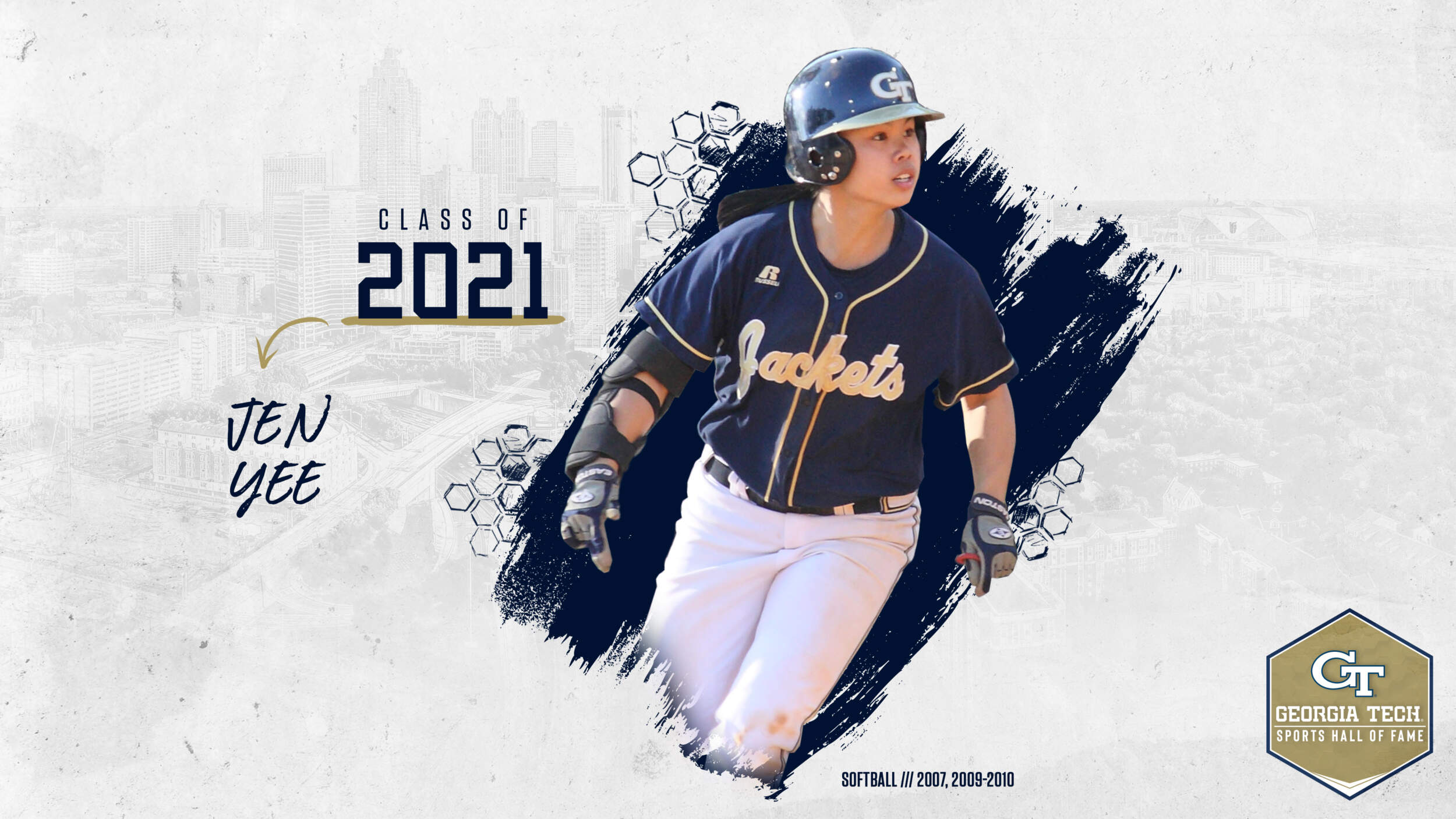 One of the best players in Georgia Tech softball history, Jen Yee remains the program’s all-time leader in batting average (.425), slugging percentage (.814), on-base percentage (.552) and runs scored (229) while leading the Yellow Jackets to the Atlantic Coast Conference regular-season and tournament titles in 2009 and 2010. Yee was named a first-team All-American by the National Fastpitch Coaches Association and ACC Player of the Year in 2010, as well as a first-team All-ACC choice in 2009. During the three seasons she played, the Yellow Jackets averaged 50 wins and posted a 151-42 overall record, as well as an ACC mark of 50-11, and played in the NCAA Tournament all three seasons. In addition to her career records, she ranks second in career doubles (46) and fourth in home runs (54), and set season standards for batting average, slugging, on-base percentage, runs scored, home runs and bases on balls. She was named the ACC’s Scholar-Athlete of the Year in 2010, as well as making the Academic All-ACC team three times. A native of British Columbia, Yee joined the Canadian National Team in 2007, winning silver medals in the 2007 and 2011 Pan Am Games, competed on four world championship teams in 2010, 2012, 2014 and 2016 and in the 2008 Olympic Games in Beijing. She also played professionally in Japan before beginning a career as a software engineer.