Naples, Fla. – Freshman Christo Lamprecht fired a closing 2-under-par 70 Tuesday to finish in a tie for third place, including an eagle at the final hole that helped lift Georgia Tech into a second-place finish at the Calusa Cup golf tournament. Will Dickson shot 71 Tuesday, and Ben Smith fired a 73 to finish in a tie for ninth for the Jackets.

Tech, which began the day just a shot behind No. 2 Oklahoma for the lead after 36 holes, couldn’t keep up with the Sooners Tuesday but did maintain its second-place position with a 1-over-par total of 289. The Yellow Jackets wound up eight strokes behind Oklahoma, but finished ahead of top-ranked Florida State, No. 15 Florida, No. 8 Texas and No. 7 Wake Forest on the final leaderboard.

The Yellow Jackets are off until April 23, when they begin defense of their 2019 Atlantic Coast Conference championship at the Capital City Club Crabapple Course in Milton, Ga.

TECH LINEUP – Lamprecht, from George, South Africa, had an even-par round going – three birdies and three bogeys – until he reached the final hole, a 542-yard, par-5, with the final group of the day. Tech had fallen behind FSU into third place, but the Seminoles, playing in the groups behind the Jackets, had left the door open with a pair bogeys, a par and a birdie on the hole from their counting players. Smith had birdied the hole in the group ahead of Lamprecht.

Lamprecht hit a big drive and reached the green from 170 yards out with an 8-iron, then rolled in a putt of about 40 feet for eagle. The two-stroke swing returned the Jackets to second place outright, and also cemented Lamprecht’s highest finish in six events this spring, and his third top-10, with a tie for third at 3-under-par 213.

Smith, a junior from Novi, Mich., shot 73 Tuesday with an eagle and the closing birdie that earned him a tie for ninth place at even-par 216. Dickson played steady golf with four birdies and three bogeys for his 71, and the senior from Providence, R.I., wound up in a tie for 15th at 219 (+3), his third top-20 finish of the spring. 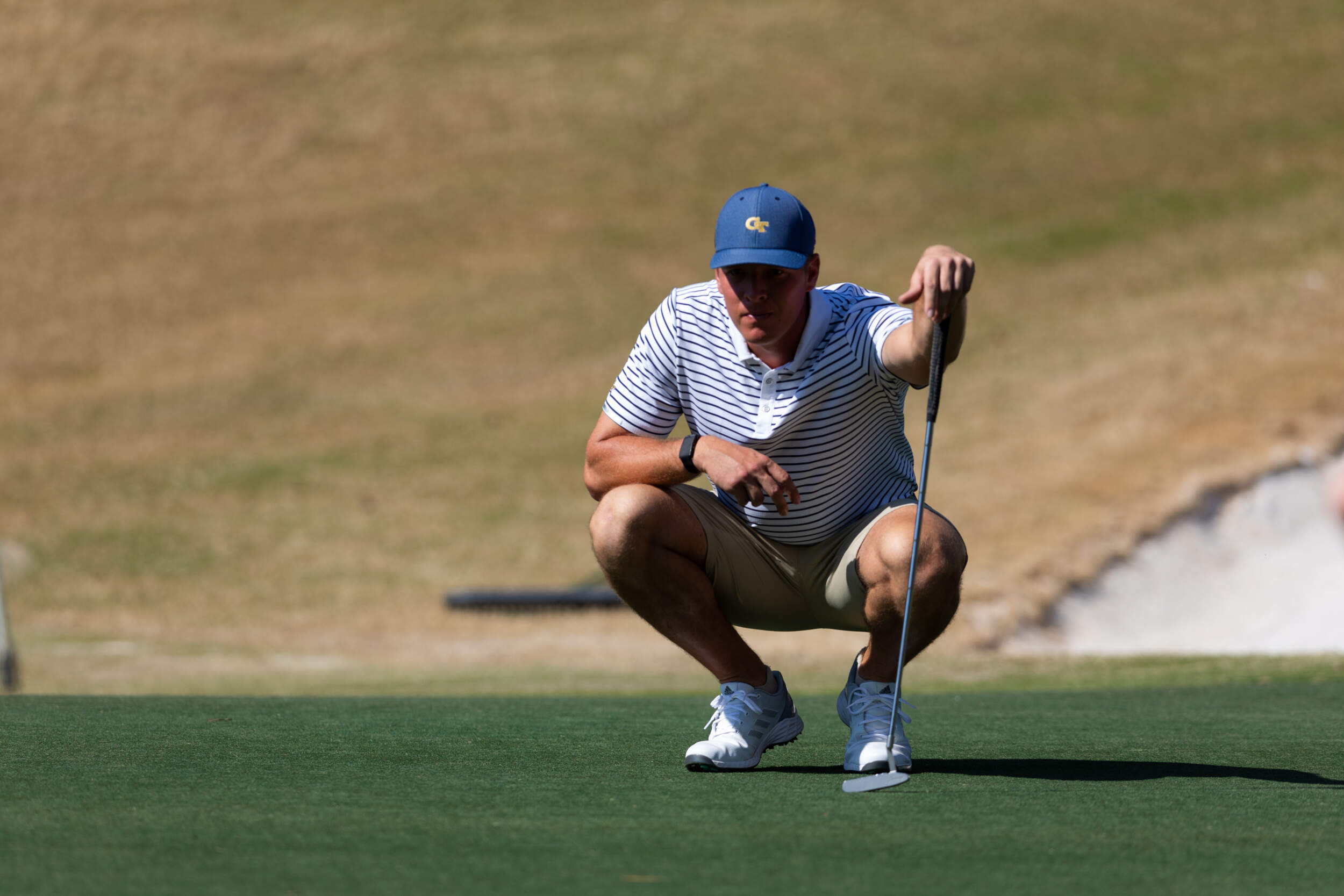 Will Dickson turned in his third top-20 finish of the spring with rounds of 74-74-71. (photo by Clyde Click)

TEAM LEADERBOARD – Oklahoma posted the best round of the tournament Tuesday with a 6-under-par 282, led by Logan McAllister’s 68, and finished 54 holes at 5-under-par 859, eight shots clear of the field. Tech finished at 3-over-par 867.

INDIVIDUAL LEADERBOARD – His team finished third, but FSU all-American John Pak fired a closing 67, coming from sixth place after 36 holes to win medalist honors with a 5-under-par total of 211. The Sooners’ McAllister came up a shot short after his 68 Tuesday and posted a 4-under-par 212 to finish second.

Tech’s Lamprecht tied for third place with Texas’ Pierceson Coody at 213 (-3), while first-round leader Joe Pagdin of Florida wound up in a four-way tie for fifth place at 215 (-1). The Yellow Jackets’ Smith tied for ninth at even-par 216 with Oklahoma’s Quade Cummins and the Longhorns’ Cole Hammer. 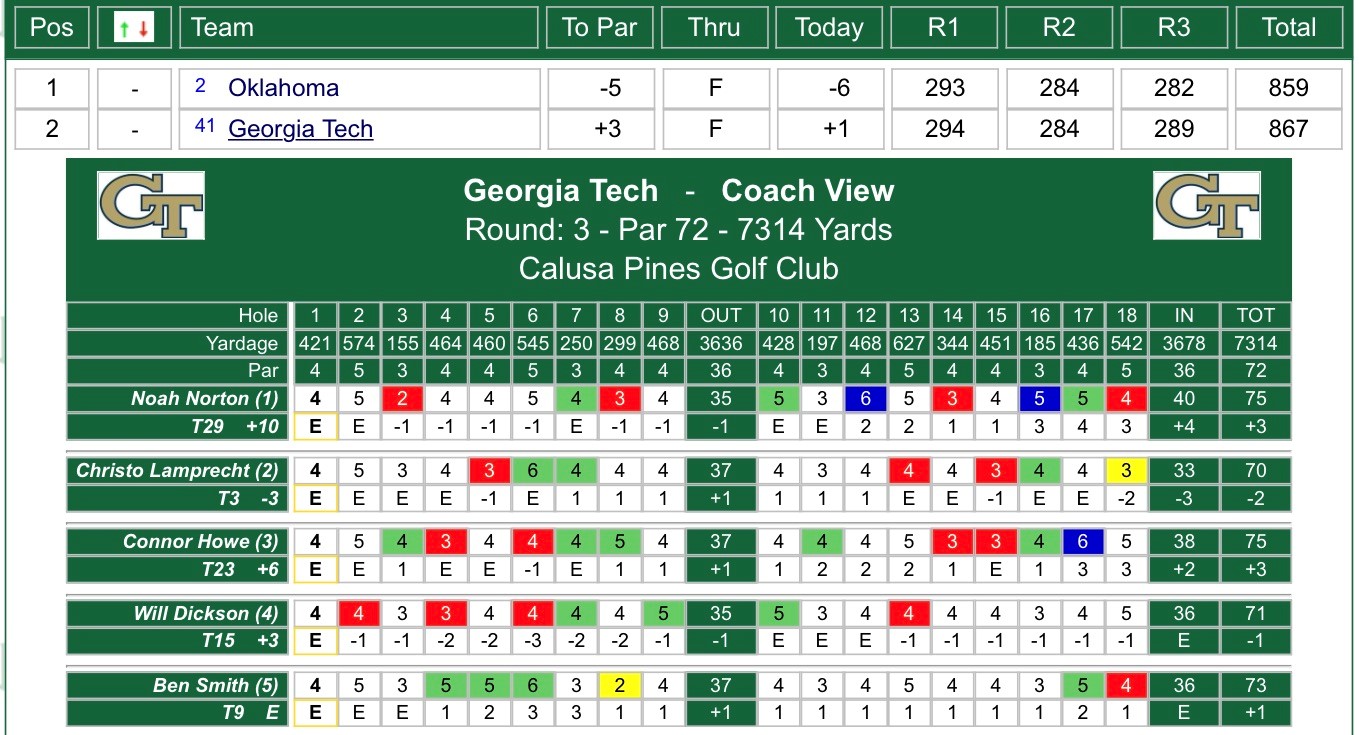 “The guys did a great job again today of managing a difficult golf course. They fought hard and played very nicely. I told them afterward that this is what NCAA golf feels like. That felt like post season from the first tee on, a lot of great teams and players and a really challenging golf course. It was a real positive experience for our guys. Some of them have not been in that kind of environment, and it was good for them to get it with ACC coming up.”

Why an infrastructure for aging is good for America

How to understand your employees and keep them happy

Who are the early favorites to win the NFL rushing title?