Growth trajectories in cases and deaths

Total cases in other countries

More than 400,000 Americans have now been killed by the coronavirus, a horrific marker of the misery the virus has spread across the country, as the rate of deaths from Covid-19 increases.

The latest death toll comes as thousands more deaths are expected in a bleak American winter with widespread Covid transmission, as a more transmissible strain spreads across the country and a mass vaccination campaign gets off to a slow start.

The Johns Hopkins University Coronavirus Resource Center reported 400,022 people had died. The burden is disproportionately borne by people of color.

Months of death are still ahead for the US, as people recently infected by the virus become ill and perish. A forecast assembled by the US Centers for Disease Control and Prevention (CDC) predicts that the death toll could be 477,000 by 6 February. 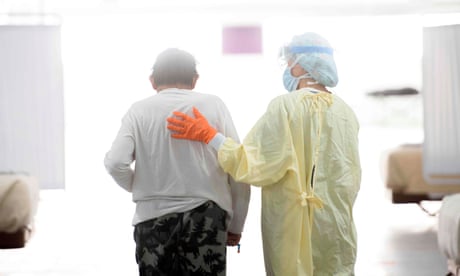 “1920 was the last time an infectious disease was a leading causing of death in the US,” said Dr Stephen Woolf, an expert in population health and a professor at Virginia Commonwealth University. “For generations, people who study public health have been taught that era is behind us.

“Once again, an infectious disease has become a leading cause of death,” said Woolf. “Americans are more likely to die from Covid-19 than from heart disease or cancer, and that is something I never thought I would ever say in my career.”

What’s more, the scale of death is expected to decrease American life expectancy by more than one year, the largest single-year decline in 40 years, according to a recently published study in the Proceedings of the National Academy of Sciences.

That burden also falls disproportionately on Black and Latino people, who have experienced a higher death rate and will lose more than two years of life expectancy. The life expectancy gap between white and black Americans is expected to widen to more than five years, a 40% increase.

Woolf and other public health experts believe the scale of death in the US is a reflection of the failure to control the virus ahead of an expected winter surge, travel over the holidays, and failure to implement widespread public health measures such as masking until very late.

The administration of Donald Trump has faced major criticism for its handling of the virus after it repeatedly failed to organize an effective national response and its top officials – including the US president himself – regularly trafficked in conspiracy theories and denialism.

Now, an acceleration in mortality is also partly expected because a new, more transmissible variant of Covid-19 is believed to be spreading in many states. The strain, called B117, transmits more easily from person to person. The CDC expects it to overtake dominant US strains by March.

The variant is not believed to be deadlier. But the strain will probably lead to more cases and more deaths as further burdens are placed on already overwhelmed hospitals.

Vaccines hold the potential to bring the pandemic to an early end through mass vaccination. However, the hope heralded by the emergency authorization of vaccine candidates has so far been met by a bumpy deployment. More than 31m doses of two available vaccines have been distributed, but only 12 million people have been vaccinated.

“One thing that’s clear is that the issue of getting 100m doses in the first 100 days is absolutely a doable thing,” said Fauci on Sunday on NBC’s Meet the Press.

Even as Americans mourn the extraordinary loss of 400,000 people, this figure too probably underrepresents the extraordinary toll of the virus. Analyses of “excess mortality”, which compare the expected number of deaths to actual deaths, show official death counts represent only 60-70% of the true death toll.

That is because official tallies do not count Covid-19 deaths not listed on death certificates, while fatal conditions have gone untreated because of disruptions caused by the pandemic.

Recent research also put the monetary cost of the pandemic at nearly 90% of the US gross domestic product, or roughly $16tn through the fall of 2021. That enormous figure was reached by analyzing the economic burdens of death, mental health impairment, and the long-term disabilities of “long-haulers” associated with Covid-19.

• This article was amended on 20 January 2021 to clarify that the B117 variant is believed to be spreading in many states, rather than in most states as an earlier version stated.

News is under threat …

… just when we need it the most. Millions of readers around the world are flocking to the Guardian in search of honest, authoritative, fact-based reporting that can help them understand the biggest challenge we have faced in our lifetime. But at this crucial moment, news organisations are facing a cruel financial double blow: with fewer people able to leave their homes, and fewer news vendors in operation, we’re seeing a reduction in newspaper sales across the UK. Advertising revenue continues to fall steeply meanwhile as businesses feel the pinch. We need you to help fill the gap.

We believe every one of us deserves equal access to vital public service journalism. So, unlike many others, we made a different choice: to keep Guardian journalism open for all, regardless of where they live or what they can afford to pay. This would not be possible without financial contributions from those who can afford to pay, who now support our work from 180 countries around the world.

Reader financial support has meant we can keep investigating, disentangling and interrogating. It has protected our independence, which has never been so critical. We are so grateful.

We need your support so we can keep delivering quality journalism that’s open and independent. And that is here for the long term. Every reader contribution, however big or small, is so valuable.

PPP Aid to Small Businesses: How Much Did $500 Billion Help?